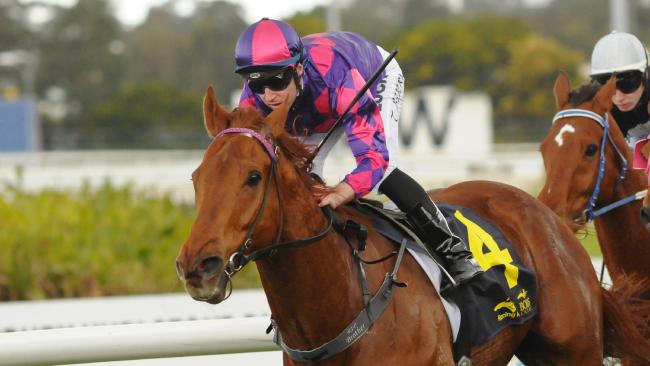 A softer surface and controlling the lead are the factors trainer Kim Waugh believes are key to Dylan’s Rojo (Dylan Thomas x Princess Tinkabell) to putting in an improved effort for his Melbourne Cup-winning owners.

Dylan’s Rojo was racing back then and went around at Hawkesbury two days after Protectionist cruised to victory in Australia’s greatest race.

Protectionist returned to Europe where he won a Group One race before his retirement this week while Dylan’s Rojo returns to metropolitan grade in Saturday’s Ashbury Handicap (1550m) at Canterbury.

Dylan’s Rojo ran fourth first-up at Rosehill on September 24 and second at Port Macquarie on October 7.

He was last of 12 runners at Taree on October 21, but trainer Waugh warns against reading too much into that performance.

“He got to the front and then one of the outsiders took off and took him on so the jockey let it go and just kept running,” Waugh said.

“It really sort of mucked the race up a little bit.

“He was just a little bit jarry pulling up. Not too bad but the whole combination of things were a bit costly for him.”

The natural front-runner is no wet-tracker but appreciates some give in the surface, Waugh said.

“He’s such a big heavy horse, it’s always nice when the sting is out of the track a little bit,” she said.

Waugh says Dylan’s Rojo gets the benefit of a significant weight drop to 54kg.

“I’ve been really pleased with him. His work’s been good this week so he’ll go well,” Waugh said.

Jay Ford, who has been aboard Dylan’s Rojo for more than a third of his 25 starts, will get back on him on Saturday from barrier four.

Dylan’s Rojo is a son of Zeditave mare Princess Tinkabell and was born at Amarina in 2010. -AAP