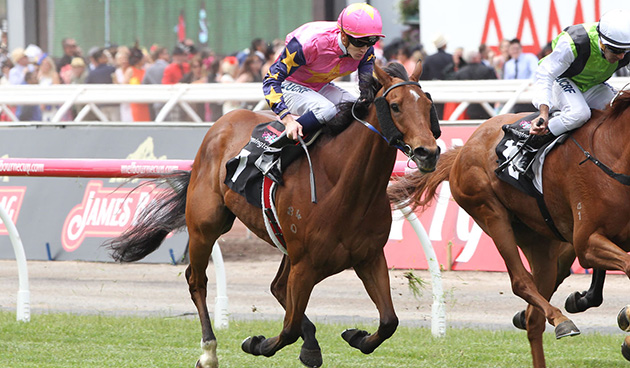 But as numbers began to fall, the six-year-old has found himself in Saturday’s 2400m-handicap.

The gelding was first emergency when the field was finalised on Tuesday and gained a start with the scratching of New Zealand mare Fanatic following a suspected spider bite.

O’Brien had Saturday’s Coongy Cup in mind for De Little Engine as part of a long range plan towards winning the Lexus Stakes at Flemington on Derby day and gaining a start in the Melbourne Cup.

“We didn’t expect at any stage that he was going to get a run in the Caulfield Cup,” O’Brien said

“We’re certainly not complaining as in any other year we wouldn’t even be an emergency.

“He’s gone through the grades over the last couple of seasons and carried big weights.

“Now that he’s getting up in grade he’s getting right down in weight which is a big help as he’s only a little horse.”

O’Brien won the Caulfield Cup in 2007 with lightweight Master O’Reilly who found his way into the race by winning the Herbert Power Stakes the week before.

De Little Engine will be ridden by Ben Thompson, one of three apprentices riding in the race for the first time.

Thompson found out De Little Engine had made the field while he was riding in barrier trials at Seymour on Thursday.

“I can’t thank Danny O’Brien, his team and connections enough for the opportunity for the ride,” Thompson said.

De Little Engine was born at Amarina in 2010 for breeders SF Bloodstock before being sold as a weanling on the Gold Coast where he was purchased by Uluru Stud for $47,500.