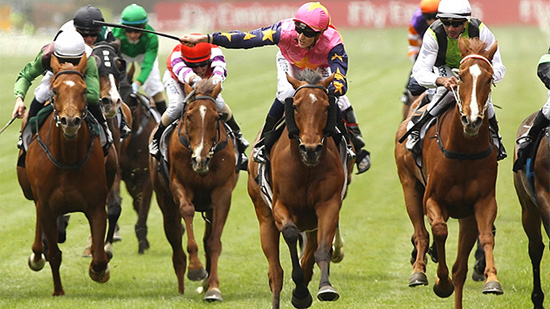 Top jockey Chad Schofield produced a gem of a ride to lift De Little Engine to victory in the J.B. Cummings AM Tribute Plate (2800m) at Flemington.

Schofield, who is now based in Hong Kong, was set a seemingly impossible task when he was at the tail of the big field and near the rails as they cornered for home.

But the young star picked his way through the field before switching to the outside late and De Little Engine ($9.50) did the rest, swooping over the top to beat Jim’s Journey ($7.50) and Tremec ($61).

“I was back travelling with a lot of horse,” Schofield said.

“He was quite keen in the run, but Joao Moreira on Sasenkile stopped in my lap pretty quickly so I went back to the inside with how the track is playing lately.

“I got nice run through, cut the corner, and he was good to the line.”