BANDERSNATCH PLOUGHS THROUGH THE WET IN WINTER STAKES
17417
post-template-default,single,single-post,postid-17417,single-format-standard,bridge-core-2.7.5,qodef-qi--no-touch,qi-addons-for-elementor-1.5.1,qode-page-transition-enabled,ajax_fade,page_not_loaded,,qode-title-hidden,qode-theme-ver-26.0,qode-theme-bridge,disabled_footer_bottom,wpb-js-composer js-comp-ver-6.6.0,vc_responsive,elementor-default,elementor-kit-17390 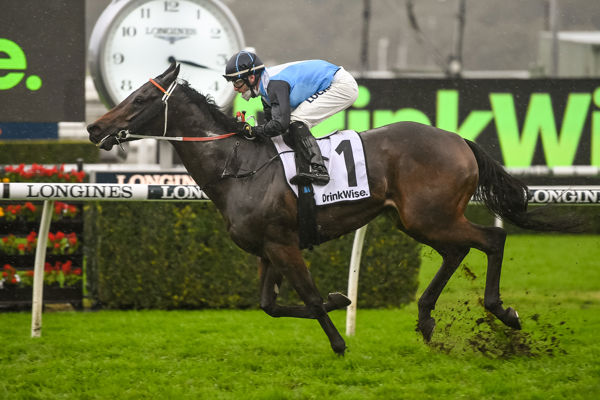 12 Jul BANDERSNATCH PLOUGHS THROUGH THE WET IN WINTER STAKES

On a bottomless track under leaden skies at Randwick, in-form gelding Bandersnatch lumped his top weight of 59kgs to a three and a quarter-length win in Saturday’s $150,000 Drinkwise Winter Stakes (1400m).

Ridden by Brenton Avdulla for Michael, Wayne and John Hawkes, the 4yo son of Casino Prince galloped them into the ground.

Coming off a win in the Listed Civic Stakes at Rosehill, Bandersnatch defeated True Detective (Shamus Award) with Order Again (Iffraaj), a further one and quarter lengths back in third as nearly 20 lengths spread out the ten starters.

“Unfortunately, the rain has really set in, and that was a bit of a query for us,” Wayne Hawkes said.

“I said to Brenton pre-race that he knows the horse and if he jumped and got to the front to take his time and treat it as a bit of a track gallop.

“He has not put a foot wrong since joining the stable, and that is his third stakes win.

“With a progressive horse like this, you never know. He gains confidence every time he steps out and is enjoying his training. We have thought about giving him a break; who knows where he will end up. We will see how he pulls up. That track may have taken a bit out of him. Looking at the replay, they are really getting into it, but he was just too good.”

Purchased by Geral Ryan for $42,000 out of the Amarina Stud draft at the 2018 Classic Yearling Sale, Bandersnatch advances his record to eight wins, three seconds and one third from 20 starts with earnings of $560,930.

He is the best of four winners from five to race out of the unraced Falbrav mare Divine Faith, a half-sister to stakes-placed Arrowsweep (End Sweep).

Divine Faith has a weanling filly by Charge Forward and was covered by Brutal last spring.