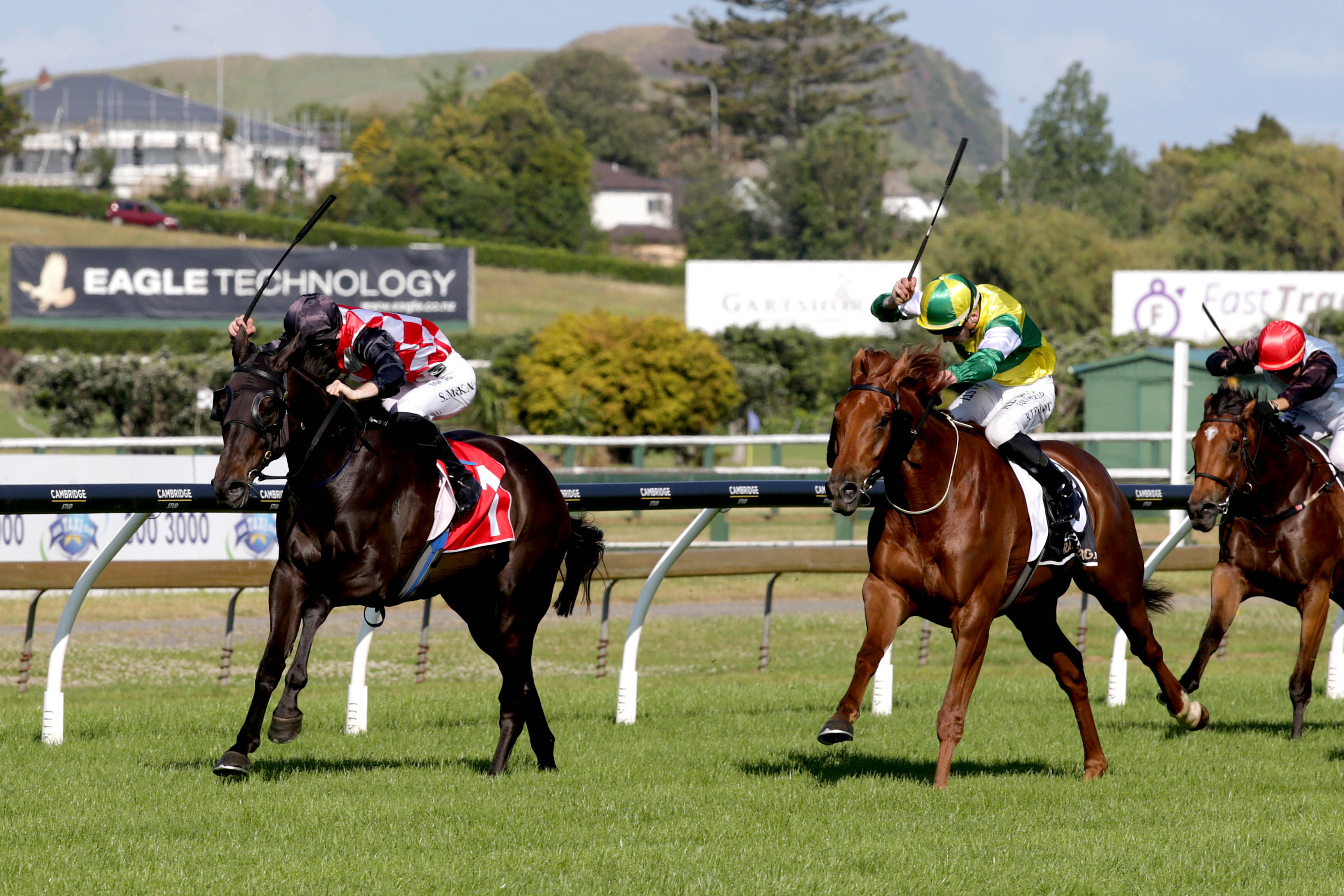 03 Dec The Mitigator leads all the way in Ellerslie feature

A bold front-running performance paved the way for tough as teak gelding The Mitigator to capture his first black type victory when he took out the Gr.3 Eagle Technology Stakes (1600m) at Ellerslie.

Bred by Salter Pastoral Pty Ltd, The Mitigator was sold by Amarina Farm at the 2016 Magic Millions Yearling Sale for $75,000.

Few would begrudge the Peter McKay-trained five-year-old his first success in group company after finishing runner-up at stakes level at his previous two starts, where he was beaten by subsequent Gr.2 Coupland’s Bakeries Mile (1600m) winner True Enough at Hastings and then progressive mare Supera at Tauranga.

Never one to die wondering, The Mitigator took up his customary pace making role on Saturday and set a strong speed out in front. Rider Shaun McKay had him travelling sweetly rounding the home turn as he established a break on his nearest pursuers, before doggedly staving off the challenge of Beauden who had chased him all the way.

McKay was quick to pay tribute to his charge who puts his all into his races every time he goes to the track.

“He’s very very honest and deserved to get a race like this today,” he said.

“Sometimes they will take him on in front and often they end up running back last while he fights on.

“He just tries and tries so he deserves that one.

“We had a bit of a problem going into his last start where he had missed a run, but we still wouldn’t have won as Supera ate him up and spat him out but he still ran right out of his skin like he has done again today.”

McKay is hopeful he can stretch his charge out over more ground during his current campaign as he tries to manage the gelding’s place in the ratings and subsequent weight he will have to carry in his races.

“Now he has won today he will push himself up in the points,” he said.

“He went up four or five points last time for running second and probably three or four again from today so I’m thinking about trying to stretch him out to 2000m for the Group One here on Boxing Day.

“I was tinkering about taking him down to Wellington (Gr.1 Captain Cook Stakes, 1600m) but it is going to be a good field and it is a tough mile down there when you are leading them up so I’d rather meet them here as I have always thought he would stay.”

McKay was referring to the weight-for-age Gr.1 Zabeel Classic (2000m) at Ellerslie which is the feature event on Ellerslie’s Boxing Day programme.

The win was the sixth from 29 starts for The Mitigator who took his stakes earnings over the $210,000 mark.

The Mitigator becomes the first stakes winner for Group One winning Redoute’s Choice stallion, Master of Design, who stands alongside King of Prussia at Greta West Stud in Victoria.

He is out of a three quarter sister to Fields of Omagh in Charming Ruby, who has produced five winners: among them the 3-time Melbourne stakes winner, Fontein Ruby. – NZ Racing Desk