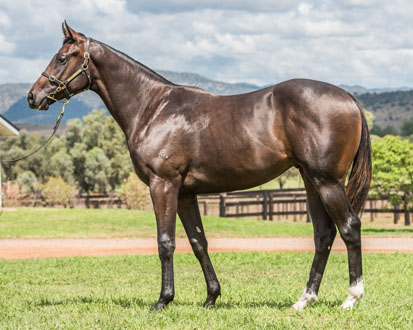 24 Apr Zoutori well-backed to score another win at Flemington

Zoutori (Zoustar x Atotori) has been well-backed to score a second straight win at Thursday’s Anzac Day meeting at Flemington.

Zoutori was a dominant first-up winner at Pakenham last time out and has drawn barrier seven for his second-up assignment. Craig Williams has the ride on the promising galloper.

The gelding returns to Flemington for the first time since his solid fifth to Ranier in the Gr.3 Carbine Stakes (1600m), which followed an unlucky fourth in the Listed Gothic Stakes on Caulfield Cup day.

Zahra said Zoutori has returned a much-improved performer for the second half of his three-year-old season.

“We’ve always thought he was going to be a good three-year-old and four-year-old and he’s developed into a pretty imposing horse when you see him in the flesh.

“He’s a big horse, dark and has eye-catching markings. He’s a terrific type these days.

“He should have probably won a stakes race at Caulfield when a riderless horse was all over him and got him beaten.”

Zoutori steps up from Benchmark 70 grade to open three-year-old company but Zahra said the $135,000 race looked a winnable option for him on his way to tougher assignments later in his campaign.

Zahra said a trip to Brisbane was a possibility for Zoutori if the horse continued his rate of development.

“He’s been going really well since the Pakenham race and he had a great gallop at Flemington on Saturday morning,” Zahra said.

“If we don’t run out of time, the Queensland Derby won’t be out of reach I reckon. I think he can get the mile-and-a-half so we’ll keep going up in trip and see how far he gets.

“I think it’s just a matter of the further he goes the better and you don’t have to be a superstar to win a Queensland Derby.” -Racenet.com.au