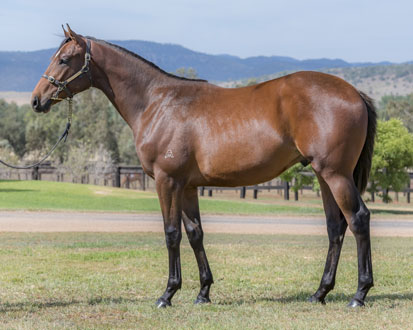 Promising Rubick gelding Erno (x Little Mary) made it two wins in as many starts when he led throughout and skipped away to win with authority at Warwick Farm on Wednesday.

Prepared by Kim Waugh, Erno was an easy debut winner on a heavy tack at Wyong last month and looked every bit as good on a firm surface and stepped out to 1300 metres. Sent off as favourite, he travelled smoothly for Blake Shinn and hit the line full of running to win by a length and a quarter. “He did all that I asked of him today,” Shinn said. “He’s very professional and well educated. He was really strong right up the straight and is a horse with a bright future.” A $70,000 Magic Millions purchase for Kim Waugh from the Amarina Farm Magic Millions draft, Erno runs for a syndicate that includes his breeder Ralph Johns. He is the first foal from Little Mary, a winning half-sister to Group Three winner Hofmeister and stakes-winner Callanish. Little Mary has a weanling filly by Rubick and is now in foal to another of the young Coolmore sires in Caravaggio (USA). Erno is one of nine first crop winners for Rubick, whose fee has been set at $38,500 at Coolmore this spring. -Breednet.com.au