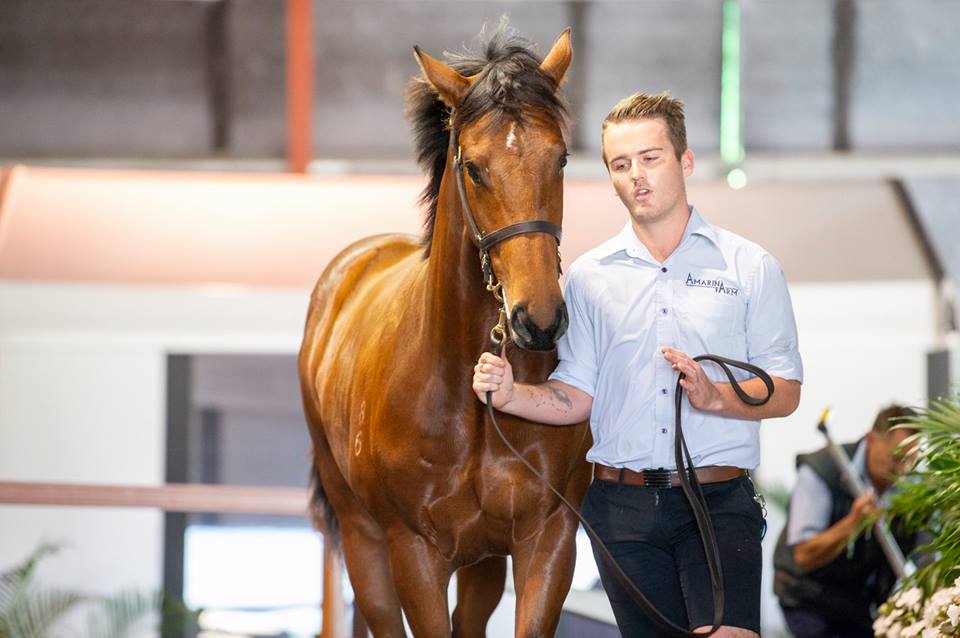 A colt by Tavistock (Montjeu) from the draft of Amarina Farm looks set to join John O’Shea’s Randwick stable, after being purchased by syndicator Champion Thoroughbreds for $250,000 at the Magic Millions Gold Coast National Yearling Sale yesterday.

In realising that figure, the colt equalled the highest-priced lot at Book One of the sale.

Champion Thoroughbreds’ Jason Abrahams said he and O’Shea had identified the colt as a likely prospect six months ago before an incident led to him being withdrawn from this year’s New Zealand Bloodstock Karaka Yearling Sale.

“We really liked the colt when we first saw him in New Zealand and then we noticed he was in this sale. We flew up to have a look at him among the others and he had really come on well in those six months,” Abrahams said. “He doesn’t really look an out and out stayer. He looks more a miler – like Starcraft who is in the pedigree. ”

“He’s full of quality with a good female line. He’s big and strong and has a deep and strong hip and hindquarter.”

Catalogued as Lot 1900, the colt is the second foal out of the placed mare Lithograph (Echo Of Light), who is a half-sister to the stakes winner Lawspeaker (Singspiel). The colt’s second dam is the Listed winner and Group One-placed mare Forum Floozie (Danasinga), herself a half-sister to Group One producing stallion Starcraft (Soviet Star) and the stakes-placed Pin Up (Pins).

Amarina Farm’s Craig Anderson told ANZ Bloodstock News he rated the youngster as one of the standout lots at the National Sale.

“He had a small hiccup there in December, so he was sent over (from New Zealand) specifically for this sale as it most suited him,” said Anderson. “He is a nice, big strong horse with plenty of scope, plenty of bone. Even being a big horse, he was relaxed and used himself very well.”

Catalogued as Lot 2004, the colt is the first live foal out of the winning mare Rock Cathedral (Octagonal) who is a half-sister to the Macau stakes winner Happy Gladiator (Viscount).

He had been passed in for $90,000 (reserve $120,000) at the Magic Millions Gold Coast Yearling Sale in January from the Coolmore Stud draft before being re offered by Amarina Farm yesterday.

“It was a good result for him. He was well inspected and we were happy with what we got,” Anderson said. “He went through earlier sale and had a setback, so they decided on this sale and they are happy (with the result).”

At the end of book one, 230 yearlings had sold at a clearance rate of 71 per cent, up from Tuesday’s 62 per cent. Anderson said buyers across the board were not prepared to compromise on type.

“It’s a type sale and if you didn’t have the right type you paid the penalty,” he said. “For the resale value of the horses a good type (is important). We saw it in the broodmare market last week as well. Mares who were good types sold better than those who weren’t and the better pedigree helped them along as well.” -ANZ Bloodstock News